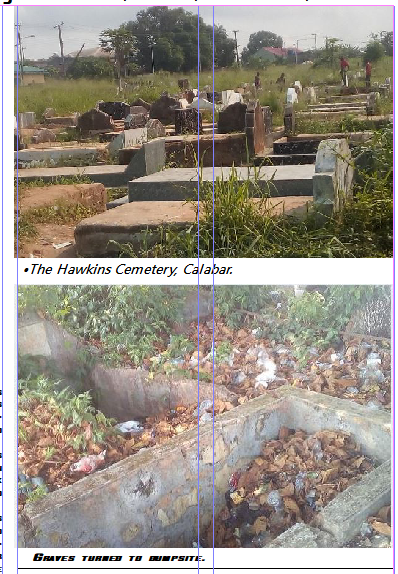 …We use tombs as eating slabs, snooze on graves —Residents

FOR obvious reason, the palpable fear of burial grounds not just because of the eerie consciousness that it is an abode of the departed but the horror of bumping into death-defying ghosts and dangerous spirits.

But the story is different at Calabar, Cross River State, where the dead and the living literally live together at Hawkins Cemetery, a larger part of which has been overgrown by weeds.

Unlike many funeral grounds found on the outskirts of the state capital, Hawkins Cemetery is located right in the heart of Calabar. It served as a burial ground for white missionaries, one of them Rev. Hawkins, an Irish Catholic Missionary who died in Calabar in 1864. That was why the place was named after him. It is the final resting place of famous Chief Margaret Ekpo, Nigerian pioneer women rights activist and social mobiliser.

Over the years, the place has served as a committal ground for residents of Calabar, particularly the indigenes of the city, Efik. However, people from other places who wish to be laid to rest there and could afford it are buried there.

Chairman of the Cemetery, Chief Kinpa, told NDV: “We charge N100,000 for ordinary grave while the one with tiles cost N170,000. That includes the digging, blockwork, lowering of casket, plastering and headstone.”

A gravedigger who gave his name as Etete hinted: “I dig an average of three graves a week and each grave costs N2000 and a bottle of Lord’s dry gin.”

Curiously, some of the graves have caved in and turned to dust bins where residents of adjoining streets dump their refuse, while some tombs are used as dining tables.

“We lay on the graves at night to take fresh air and we place our food on some of the graves to eat. Nothing happens. The body inside is dust and cannot bite,” Amber, a resident of Ansa Ewa Street said.

She said she has not observed any strange movement like ghost or evil spirit around the area at night or in the day.

Her words: “I was born here and I am now 23, I go out and come in any time of the night and nothing has tried to stop or challenge me,”

Her elder brother, Otobong, said most of those that visit the place at night are occultists and cultists who go there to conjure spirits for their evil practices.

“Sometimes at night, you see faint light and people talking in low tones and that is when some people come here to make incantations. Last week, I picked seven new machetes stuck round a grave.”

“In December, last year, around 8:00 pm, we saw a lady walking around here naked and muttering the name of a man. We accosted her and called the police who took her away,” he divulged.

“Since I was born over 50 years ago, I have been hearing that the cemetery is about to be filled, yet till today there is still space to bury people,” Iniobong, a resident of the area, said.

He asserted that people who are still alive have to stay somewhere whether on cemetery land or not, adding: “After all, everybody is waiting for his day.”

Land grabbers have pulled down the perimeter fence, encroached extensively into the burial ground and built houses on portions of the land making it difficult to separate the cemetery from residential houses

An official of the Calabar South LGA, Chamberlain Etim, said plans were afoot to level the burial ground and graves and the names of each person buried in each grave listed in a particular place to make room for more dead bodies to be buried there.”